Jude 5-9 – The Importance of Spiritual Order and Authority

Jude 5-9 – The Importance of Spiritual Order and Authority

SYNOPSIS. Now I desire to remind you [cf. Rom. 15:14-15; 2 Pet. 1:12; 1 John 2:21, 27], though you know all things once for all [a general attainment to “the faith,” the body of truth committed to the believers], that the Lord [Some manuscripts render it “Jesus.” Cf. 1 Corinthians 10:4], after saving a people out of the land of Egypt [illustrates apostasy in that they were part of the company outwardly but not in heart], subsequently destroyed those who did not believe [Numbers 11].

They key to faithfulness is a good foundation and a good memory. Jude’s readers knew all things “once for all.” They were taught a complete body of truth early on, and he appeals to that teaching here. Obviously, if there was not an initial teaching, there would be nothing to defend or to remember. So then, we cannot expect God’s people to be faithful if they have not been taught in the first place. But we neither can expect them to be faithful if they are not constantly reminded of the truth. Truth is not a treasure to be buried but a stewardship to uphold. There is no point in our assembly testimony that we can afford passive teaching or teachers. We must teach. We must remind. We must defend.

Just as the Lord saved Israel but not all Israelites, so He blesses the Christian community but not the apostates within it. Notice the difference between the people God saved and those (individuals) God destroyed. Though identified with Israel corporately, the ancient apostates turned back in heart to Egypt in unbelief. Thus, God destroyed them. So with apostates today, they are corporately identified with God’s people, but their rejection of the faith in heart will merit God’s destruction.

SYNOPSIS. And angels [2 Peter 2:4] who did not keep their own domain [sphere of authority, either their own position of authority or God’s sphere of authority in prescribing certain bounds for them], but abandoned their proper abode [their particular habitation, that which was belonging to angels; perhaps a reference to Genesis 6:1-4?], He has kept in eternal bonds [unalterable sentence of damnation, no redemption] under darkness [hell] for the judgment of the great day [the Lake of Fire], just as Sodom and Gomorrah and the cities around them [Genesis 18-19], since they in the same way as these [that is, angels, perhaps supporting the idea that Genesis 6:1-4 may refer to angelic beings lusting after the daughters of men] indulged in gross immorality and went after strange flesh [beings not sexually prescribed by the divine order], are exhibited as an example [the Old Testament as a book of types and foreshadows and illustrations] in undergoing the punishment of eternal fire [The fire and brimstone of Genesis 19 was a token of everlasting fire unseen by man, a physical initiation into an eternal consuming flame.].

There was a point when the angels were guilty of violating God’s authoritative limitations of their sphere and abandoning their befitting habitation as angels. Thus, they were bound to eternal wrath. Some link this to Genesis 6:1-4, but the lesson here is more important than its specific reference.

So, the apostates violate the dominion of God and return to the dominion of Satan, while rejecting the sphere appropriate for a believer. Their promise, too, is an unalterable sentence of damnation, initially carried out in hell and ultimately in the Lake of Fire following the Great White Throne judgment.

Jude then makes a comparison between the angels’ rebellion and Sodom’s rebellion, apparently indicating that sexual immorality was common to both. Sodom’s rebellion was not only a specific action but an entire culture that glorified foreign sexuality, specifically homosexuality and perhaps bestiality as well. Their minds thought in terms of fornication, it seems, and their instincts were all-controlling. Thus, just as God destroyed the angels, so God destroyed Sodom. He consumed the city in fire as an outward expression of the eternal fire in which He would consume the people.

Apostasy is never so evident as when God’s creatorial order is violated, especially in terms of headship and sexuality. It is no small culture change to embrace homosexuality and promiscuity; it is rather the sign of a self-destructing culture that will endure the fire of God. But carrying the principle further, it is no small sin to tamper with Headship passages like 1 Corinthians 11, 1 Corinthians 14, and 1 Timothy 2. It is no small sin to leave God’s predefined order, for it reflects His own authority. May we stop capitulating to cultural trends and bow to God’s authority. No agendas, no prejudice, no pride – let us bow to God’s design.

SYNOPSIS.Yet in the same way these men, also by dreaming [Possibly self-acclaimed visions. At the least, they were caught up in their own imaginations.], defile the flesh, and reject authority, and revile angelic majesties [Whether these are good or bad angels, these false teachers disregard the gravity of the spiritual realm and rejected weighty positions therein.]. But Michael the archangel [a chief angel himself, adding weight to Jude’s argument], when he disputed with the devil and argued about the body of Moses [perhaps relating to the Transfiguration in Matthew 17 or to an unknown conflict that took place shortly after Moses’ burial near Beth Peor], did not dare [Our charismatic friends could take a lesson from this.] pronounce against him a railing judgment [because the evil of the Devil did not change the gravity of his position], but said, “The Lord rebuke you!” [implying there is no higher angelic rank than the devil, even among holy angels, thus demanding the rebuke of the Lord]

There are four destructive qualities that Jude identifies here: dreaming, defiling, dissenting, and deriding. These seem to logically flow from one another.

The stupidity of these men is shown from an illustration of Michael’s formal respect for even the Devil himself. Here, then, is the scenario. At some point in Israel’s history, the body of Moses came into dispute, perhaps shortly after his death or at the Transfiguration of Christ. Being the chief angel for Israel’s protection, Michael had to address Satan’s attack. In the process of this argument, no ground could be gained unless the Devil was silenced by an authority greater than him. Since the Devil was chief among God’s angels regardless of his present wickedness, Michael had to respect the position and could not bring a slanderous judgment. So, he appealed to the Lord, Who it seems has the only position that is higher than what Satan possesses in the angelic realm. The lesson, then, is this: even the Devil’s wickedness did not annul the formal respect that his position demanded. Thus, how ignorant are mere human apostates that revile glorious supernatural beings, regardless of who they are.

For today, we must learn to respect authoritative positions. It is not wrong to identify factually the sin of authoritative figures; after all, Jude just finished pointing out the sins of angels. What is wrong is to rebuke or revile or slander authorities themselves when we do not possess a rank higher than theirs. We must maintain this balance. Especially in spiritual warfare, let us be careful not to view Satan as a street punk. Let us be very deliberate in following the commands to resist and invoking the Lord’s authority; this is a battle for which we are insufficient.

I'm a self-educated Bible student who loves studying, writing, and speaking. My passion is preaching the gospel to the unsaved and applying the gospel to believers through theology, encouragement, exposition, apologetics, and some academic subjects as well. Email me at Micah@ChristianTeaching.org with questions and suggestions regarding my website.

The Cost and Call of Shepherding - Jeremiah 23The Kind[...] 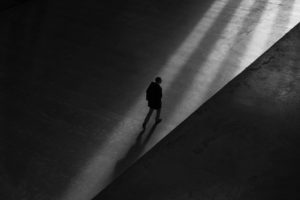 The Cost and Call of Shepherding - Jeremiah 23The Kind[...]

A Complete Summary of Doctrine

We're currently offline. Send us an email and we'll get back to you, asap.

Type and press Enter to search